In Part 1, on basic principles, I suggest that it is better to impose taxes on existing wealth rather than the wealth-creation process, and also that in general direct taxes are more honest than indirect taxes (often described as stealth taxes). This chapter brings these strands together under the question of which taxes might be eliminated, reduced or maintained within a system where LVT plays a significant part.

Prior to the 20th century, taxes in Britain were few in number: In the 1870s customs and excise duties still accounted for 60% of government revenue, income tax about 8%. Governments had always raised money through borrowing from private individuals or banks in order to fund wars (so establishing the National Debt). The introduction of the income tax in 1799 was intended as a temporary measure to fund the Napoleonic wars. Everyone was against it, and for the best part of the 19th century politicians on both sides made many promises to abolish it. But the income tax was difficult to shake off, as we all know. There was, of course, no welfare state as we know it today. Poor relief was obtained through the old poor-law acts of 1601, which were financed through local taxes at parish level. ––the ‘rates’.

The proliferation of the many different forms of taxation we know today occurred mainly in the 20th century due to the advent of the welfare state, and the need to finance the growing demand for social services. These taxes are now both numerous and complex and the contemporary tax regime does not seem to readily conform with any of Adam Smith’s four maxims, let alone that of certainty. It is difficult now for most ordinary taxpayers to grasp the convoluted workings of the income-tax system without resort to expert advice or guesswork. There is undoubtedly a need for simplification, if only to provide people with a clear understanding of what taxes they are expected to pay. So what should be done?

I believe that the introduction of LVT would provide a clear and unambiguous source of revenue that could be used to enable the reduction or elimination of other undesirable taxes––but which taxes?

Table 4, taken from the Office for Budget Responsibility data, shows the forecast for 2019–20 for government tax receipts from all sources. There are a total of 24, which are listed in descending order of the percentage of revenue raised. Income tax tops the list followed by national insurance and VAT. These three account for 64% of all revenue, far more than the other 21 sources combined, so clearly they are very significant. 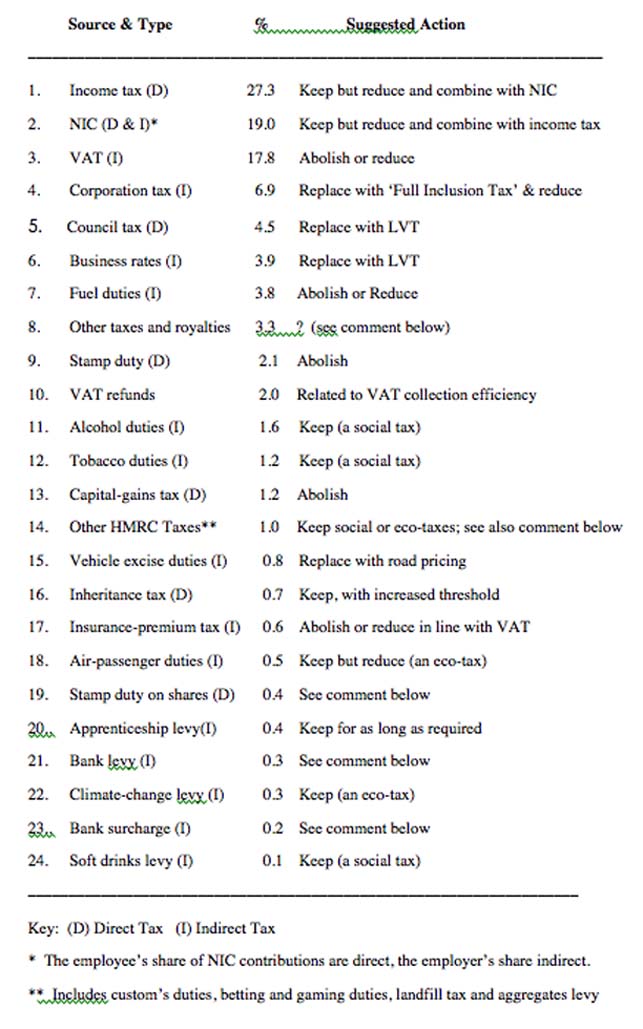 In the table, the column headed ‘suggested action’ represents my proposals as to which taxes might be abolished, replaced or kept. This I found surprisingly difficult to decide. Although I tried to be objective, I daresay my own view is no better or worse than anyone else’s. Perhaps you might like to compile your own list of preferences? In addition to the suggestions I have made, here are some further comments about some of the taxes:

I suggest that whatever loss of revenue may be incurred from eliminating or reducing any of the above taxes could be made good from a new land-value tax. In all cases, gains and losses have to be graduated over a transition period, and the principle of tax neutrality respected.

Those hard-line Georgists who still insist on the single tax would presumably eliminate all 24 taxes––a difficult proposition to imagine. One suspects they might be willing to compromise on some of them.