Apart from the funding of public services, a great deal of taxation is related to the funding of benefits that come under the heading of welfare, designed basically to help those on low incomes, or in economic distress for whatever reason. Table 5 below shows 14 different forms of current benefits (including the state pension). Some of these are aimed at the actual alleviation of poverty. Others are allowances available to all income groups.

It is quite difficult to know where poor relief ends and welfare begins, or indeed, how to define welfare. We tend not to see education or health care as part of a welfare system but more as social services, akin to a police force or a sanitation system. Perhaps pensions should be seen in the same way. Furthermore, state pensions are not free. As with national health they are largely funded by the NIC contributions through the working life of the pensioner, so it is curious to see them included as welfare. 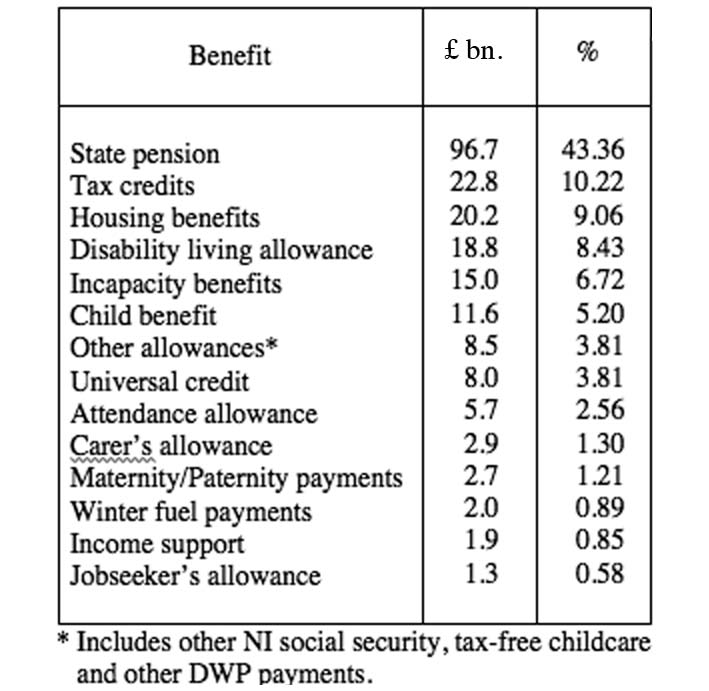 Before discussing the issue of welfare, it is worth noting how it arose historically out of the old poor laws that, in England, began in the 14th century. Prior to that, poor-relief was only available through the auspices of the church, which was required (by the Rule of St. Benedict) to provide hospitals for the sick and elderly and hospitality for travellers. In addition, wealthy benefactors provided almshouses for the relief of the poor, which in the early years were supervised by the church. The government (the king) was not directly involved. It was a feudal system, where the peasants had no rights––certainly not the right to be prosperous. The initial involvement of the government was designed more to constrain or punish the poor than to help them. The following account summarises the main events in chronological order:

Evolution of Poor Relief to Welfare in England:

1349.  The Ordinance of Labourers, under Edward III, designed to cap wages and food prices due to a labour shortage after the Black Death.

1351.  The Statute of Labourers placed restrictions on the movement of labourers.

1495.  The Vagabonds and Beggars Act, under Henry VIII, punished vagrants with the stocks. Sturdy beggars were punished and moved on.

1531.  The Vagabonds Act replaced the stocks with whipping for the able bodied. The ‘impotent poor’ (the disabled, sick or elderly) were allocated an official area in which to beg.

1536.  The dissolution of the monasteries removed many hospitals and almshouses, the primary sources of poor relief, and caused greater hardship.

1547.  The Vagabond Act introduced under Edward VI, in which vagrants were punished by 2 years servitude and branded with a ‘V’ for the first offence, executed for the second.

The new Liberal government of 1906 initiated the modern welfare state in Britain with a swathe of welfare measures prior to World War 1: *

The post-war Conservative and Labour governments continued with reforms, but at a slower pace:

* The first modern welfare measures were introduced in Germany, ironically, by the anti-socialist Bismarck: Health insurance in 1883, accident insurance, in 1884, old-age and disability insurance in 1889.

In England, perhaps the beginnings of the welfare system could be said to have started with the Poor-Law Acts of 1601. But these were funded from local rates rather than at the national level. For a long period, relief of the poor, other than through these poor-law arrangements, came from the church, charitable giving or individual benefactors. In the 19th century mutual and friendly societies were established to help people with housing, and the new trade unions assisted workers in times of hardship, but these movements were self-funded and independent––the government did not see itself as responsible for direct financial help for the poor. The Poor Law Amendment Act of 1834, which introduced workhouses, still saw poverty more as a crime than a misfortune. But this attitude began to change in the second half of the 19th century, with an increasing awareness of the terrible conditions of the poor in a rapidly industrialising society. In 1880 the Elementary Education Act introduced the necessity for regular state funding, so the state inevitably became involved. It is astonishing that even in the late 19th century many in the government that made the laws of the land, still believed that the existence of poverty was not their responsibility. The ensuing years witnessed a complete change of attitude. However, it was not until the 20th century that the modern welfare state really began to emerge with the reforming Liberal government of 1906.

All these measures of course, had to be funded, and in addition to the costs of rearmament for the forthcoming war, it put great pressure on the government to find new ways of raising revenue. The income tax played an ever-increasing role in this process. During the course of the 20th century, poor relief, as such, became absorbed into the new welfare system to the extent that, at the present time, certain benefits are no longer seen as necessary measures to assist the poor but as normal social rights. This has led to what is often described as the ‘dependency culture’. Prior to the 20th century, most of these benefits, including pensions, did not exist. Were they to disappear, the majority of us would be plunged into great difficulty. So if one also took into account free education and a national health service, only the very rich, even now, could be truly independent.

This issue of dependency resurrects the older discussions about liberty and freedom, which have been ongoing at least since the days of the Enlightenment. What role, if any, has the State to play in any of this?

This argument has to a large extent given rise to the so-called left and right of politics. Those on the left put their faith in centralised state control for the dispensation of justice, and believe that freedom can only be gained through collective cooperation. Those on the right believe the opposite: that the state should only be involved with basic requirements, such as national defence and essential infrastructure; all other economic matters should be left to the free market and individual enterprise. Thankfully, between these two extremes are the majority of citizens who may not be inclined either way. But despite the general increase in the standard of living since the dark days of the 19th century, they are still aware of widespread discontent, and the increasing maldistribution of wealth. Even in Britain, one of the wealthiest countries in the world, evidence of real poverty is returning, with the proliferation of food banks, in-work poverty, homelessness and the growing demands on welfare provision. It is generally agreed that these demands may be reduced simply by making people better off as individuals, and this is attempted through raising tax thresholds and imposing minimum wage levels. But these are only remedial measures, which do not deal with the basic causes of deprivation.

Henry George had a somewhat sceptical view of welfare, or ‘charity’ as it was better known in his time:

Although the modern welfare system has become necessary, not merely to alleviate poverty, but also to provide what are now seen as normal social services, there is an insight in George’s view. The receipt of welfare can be demeaning, especially where means testing is concerned. It may even lead to downright cruelty: One of the conditions for terminally ill people applying for support under the new universal credit system is to ‘prove that they are dying.’ 3

One of the main causes of deprivation amongst low-income groups is the cost of housing, hence the need for housing benefits or (proposed) new rent controls. A land-value tax would have the effect of lowering house prices and consequently rents. This would be a much better way of helping low earners than housing benefit, which in any case goes straight into the pocket of the landlord without directly helping the tenant. Admittedly this would be a slow process, but far more effective in the long run. Through the gradual transfer of wealth, an LVT would put money into the pockets of ordinary taxpayers, and help them with many issues other than housing. But in the meantime, we have to have the welfare and benefits system, which would gradually become less necessary as the advantages of LVT began to take effect. It could be argued that pensions, free education, national-health provision and unemployment allowance are not welfare, but necessary services that could reasonably be expected in any advanced, progressive society.

(2)   Henry George, ‘How to Help the Unemployed’. Article in The North American Review, February1894 pp. 175–184   http://www.wealthandwant.com/HG/how_to_help_the_unemployed.html